I've decided to combine all my Greece recaps together into one post so we can have a themed Travel Tuesday link-up next week! This means I'll take a little break from my European Extravaganza posts and ask you all a question to answer for the link-up, like the old days of Travel Tuesday. :) Be sure to check the bottom of the post for next week's topic!

We arrived in Athens pretty late in the evening after leaving Switzerland. We had a few drinks at the hostel bar, and I have to say, Greece had the best "traditional liquor" out of any country we visited! Everyone always wants the tourists to try the local booze, and I have to admit, it usually tastes to me like rubbing alcohol. The Greek ouzo had a tinge of black licorice, however, and I loved it!

The next morning, we took a cheap walking tour that left from the hostel. Our tour guide was very knowledgeable and had stories about every landmark we visited, including very detailed lessons on the architecture. Stops on the tour included the Temple of Zeus, the Congress building, the tomb of the unknown solider (where we witnessed the changing of the guard), Hadrian's Library and McDonald's. (Wait, why Mickey D's?! This actually has a point: Apparently this McDonald's has been vandalized several times during riots because of its association with capitalism, so it now has bullet-proof windows and steel doors. Our tour guide told us if we were ever in Athens during a riot, McDonald's would now be the safest building to seek refuge!). We also hiked up to a great vantage point on the way to the acropolis with a beautiful view of the city. 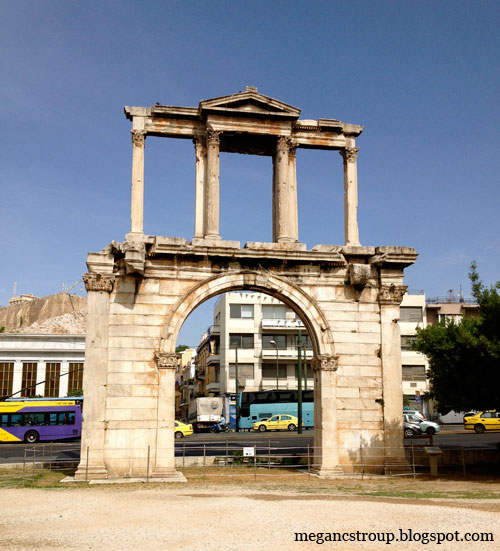 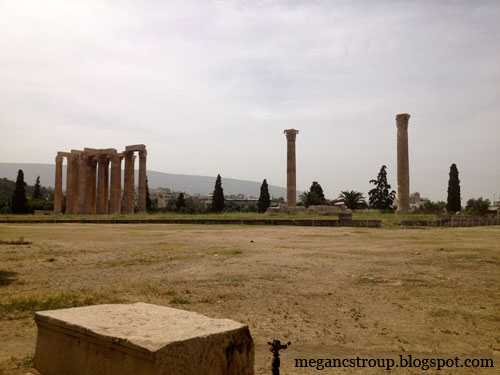 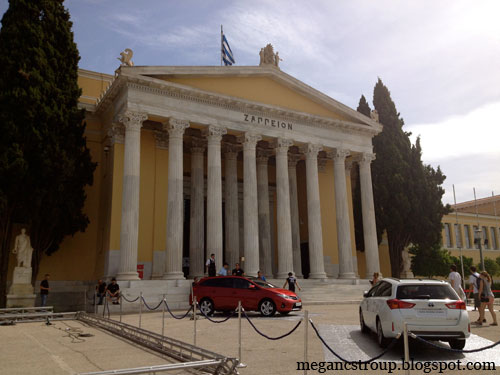 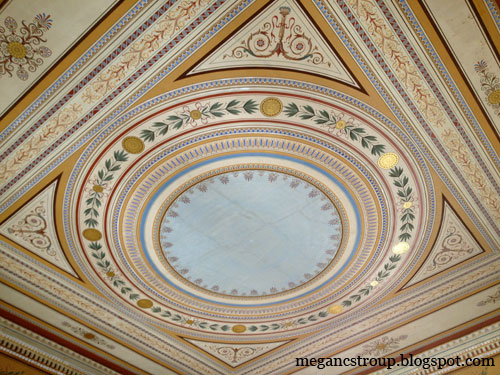 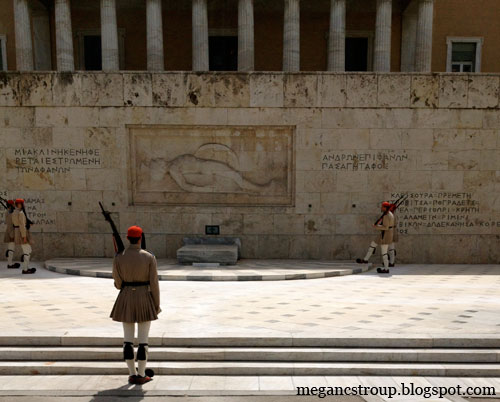 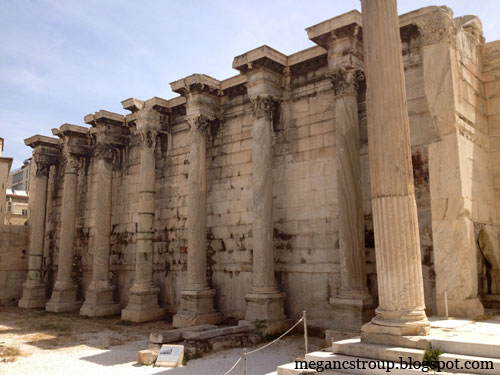 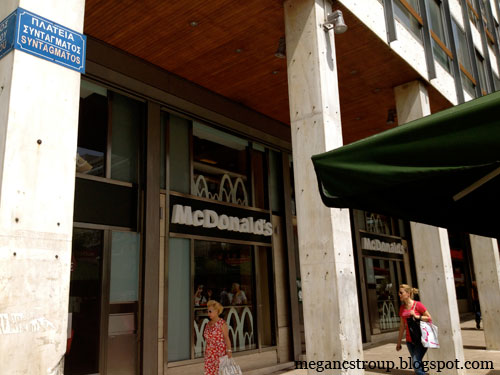 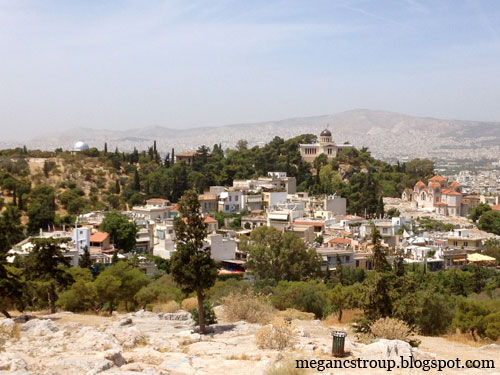 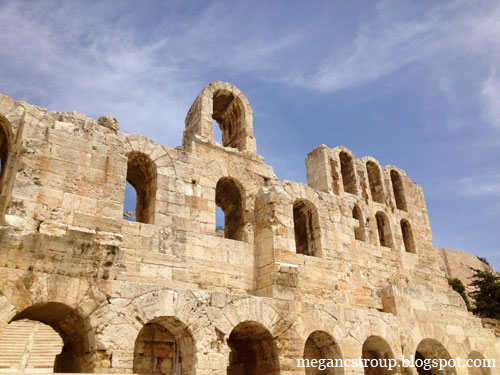 Our biggest complaint was that what was supposed to be a 2.5-hour tour ended up being more than four hours long! We had to be at the airport in the early evening, so we finally had to leave the tour early in order to walk up to the acropolis before it closed. (The tour only went around the acropolis, not up to the Parthenon or any of the other landmarks.) Therefore, our sightseeing was pretty rushed, but we still had time to hike to the top and see the famous Caryatids on the Erechteion and, of course, the Parthenon. 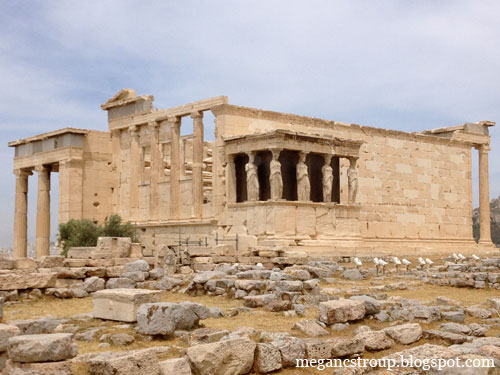 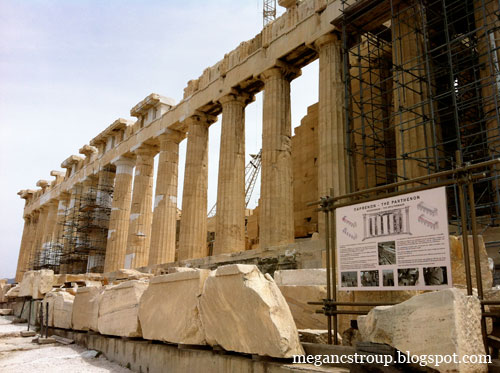 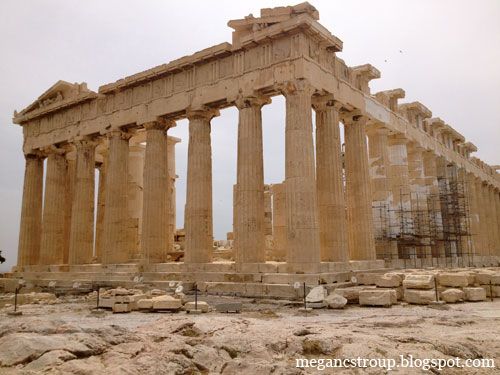 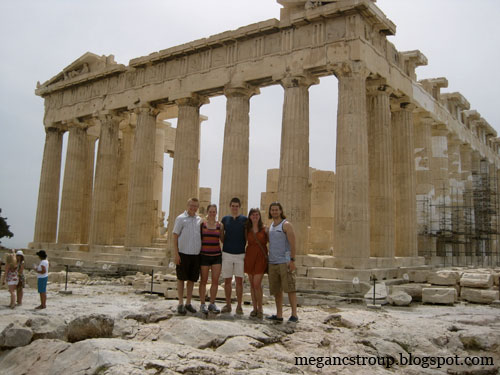 I said we got to see almost everything because even though the agora wasn't going to close for another 15 minutes when we arrived at the gate, the guards wouldn't let us through, even though we had already paid for our tickets! Sigh. Here are the pictures I managed to snap through the chain-link fence: 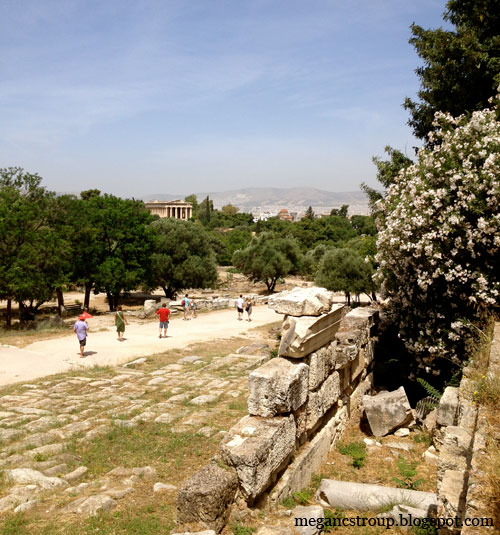 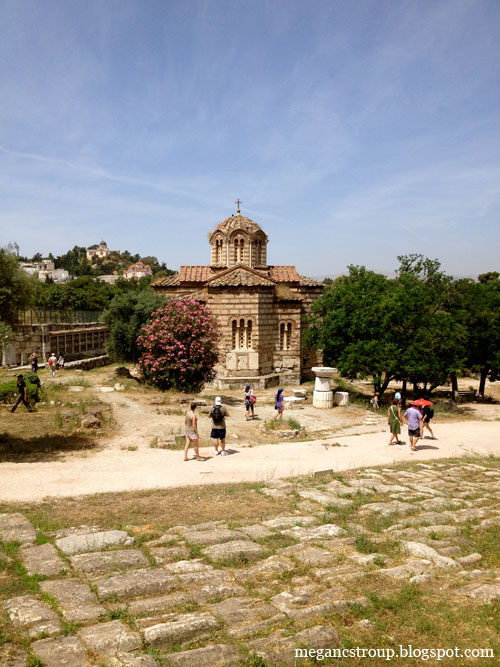 After our whirlwind 24 hours in Athens, we went our separate ways. Abby, Scott and Michael went to Santorini, but Jonathan insisted on going to an island with real sand. Of course, after we got there, he admitted he wanted it to be a little "engagement honeymoon"—I guess he was assuming I would say yes. ;) Crete is known for the best beaches in Greece, so we flew into Heraklion and checked into a little hostel in Amoudara. It was the off-season, so almost everything was closed, but the good news is we practically got the beach to ourselves! It was a nice "vacation from our vacation," as my brother liked to say. 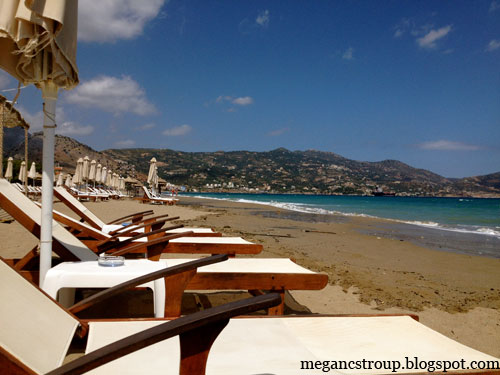 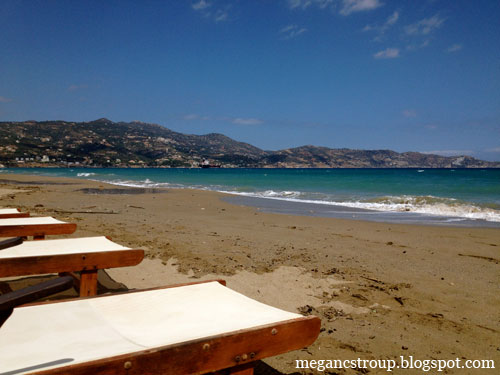 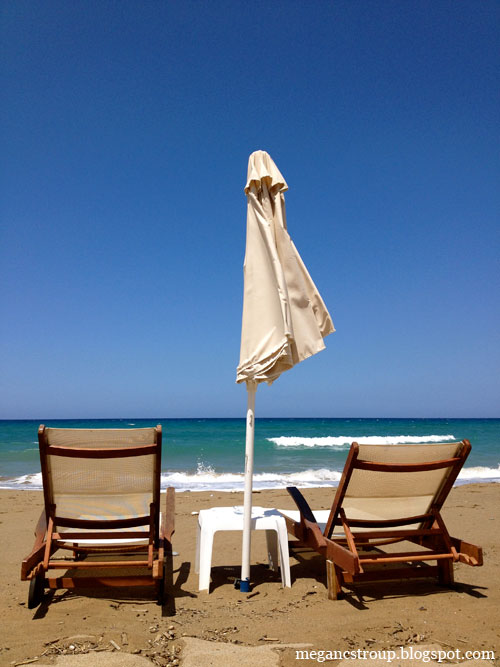 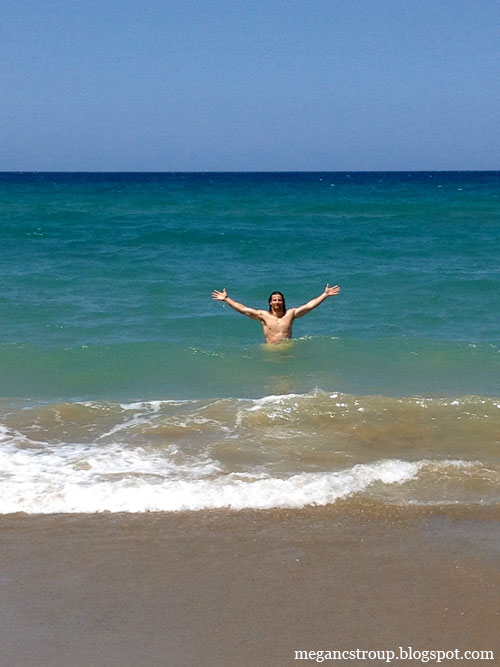 On our last day in Greece, Jonathan and I stopped at the Palace of Knossos on our way to the airport. History nerd that I am, I couldn't spend multiple days on Crete without visiting this historical landmark. It is considered the oldest civilization in Europe (the actual palace was first built around 1900 BC, but civilization in that location dates back to 7000 BC) and is home to, among other things, the oldest paved road in Europe and the legend of the minotaur. I was so amazed at the modernities of Knossos; they even had toilets with running water! Sometimes I'm more amazed with what humanity could do with the power of nature and few stones thousands of years ago than what we can do now with all the technology at our disposal. 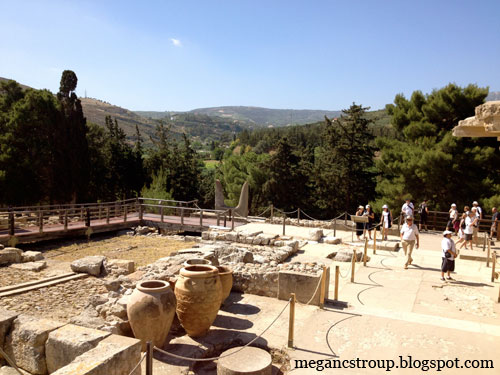 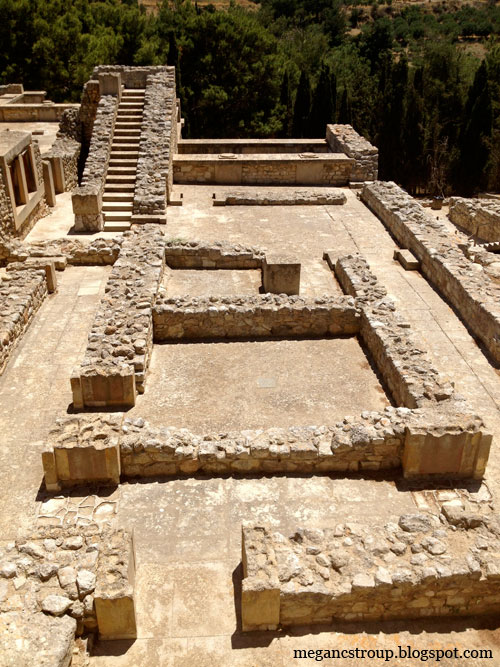 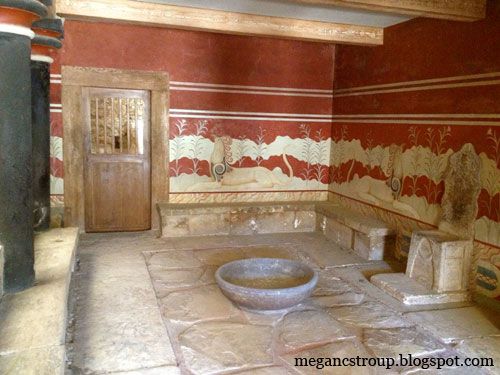 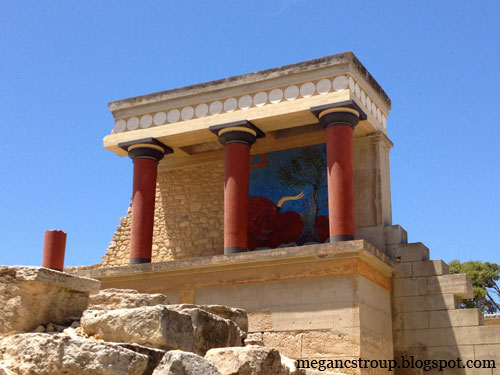 One last fun fact about Athens (and the rest of Greece): there are dogs everywhere! Apparently the city of Athens has a program that adopts stray dogs, vaccinates them and releases them back onto the streets. We even saw a dog chilling up at the acropolis a mere three hundred feet from the Parthenon itself (third photo below)! 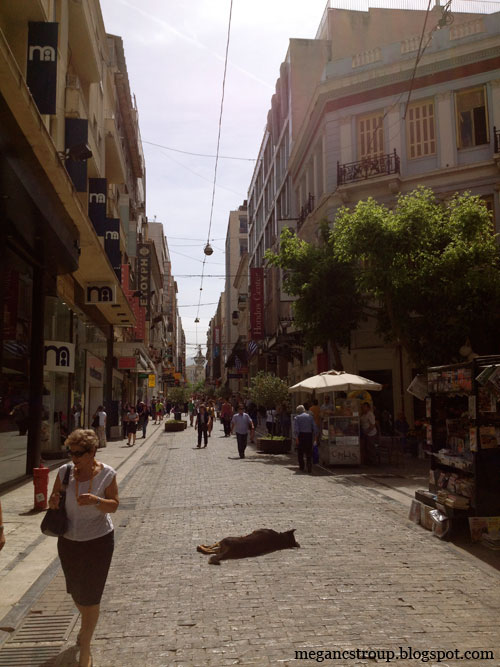 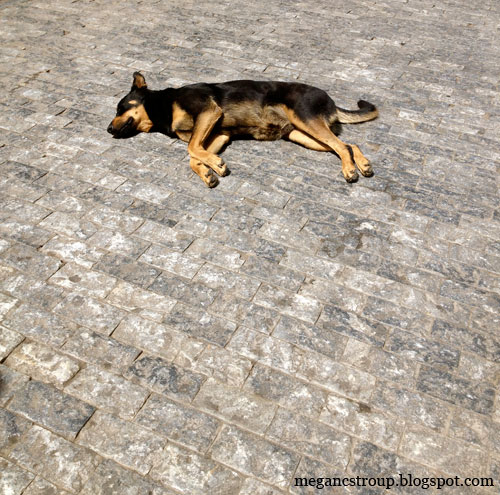 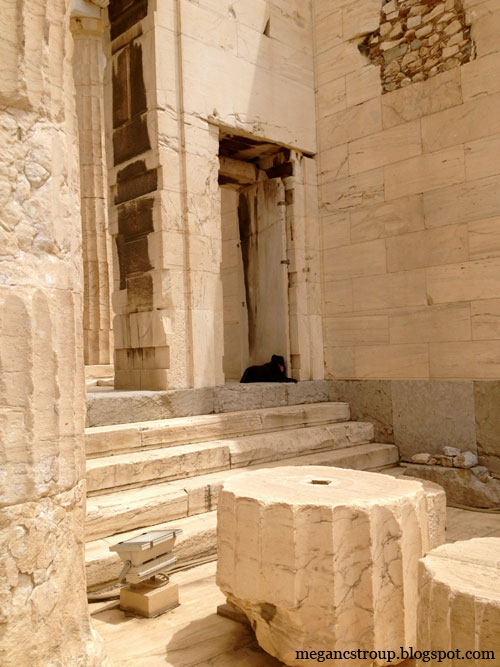 Link up your travel-related posts below! Remember, I'm totally fine with you using an old post if you haven't written about travel in the past week; I only ask that you add my button to your post and check out what other bloggers have been posting about. :)

Next week: What are your favorite apps for travel? Be sure to check back on August 27 and link up with your list!