Welcome back to Travel Tuesday and the third installment of my European extravaganza recap! Today I'm giving you a photo tour of the 48 hours we spent in Berlin, Germany. As always, you are welcome to link up any travel-related post you've written this week or even further in the past. All I ask is that you include the button at the bottom of this post and link back to my blog. :) I can't wait to hear your travel stories! Continue reading after the jump for more pictures of Berlin.

We arrived in Berlin on Wednesday evening after our four-hour train ride from Prague. I cannot say enough good things about train travel—it may not be faster than a plane, but it's generally cheaper and we didn't have to worry about shoving everything into a tiny backpack to adhere to the European airlines' miniscule luggage regulations and avoid their ridiculous fees. Plus, considering we don't have to get to the train station two hours ahead of time to go through security and all that jazz, journeys by train can often be just as fast as those by plane.

Our first night was occupied with checking into the hostel, eating some schnitzel at a local dive place (only five euros for a huge plate of schnitzel and fries!) and walking across the neighborhood to a brewery to sample some famous German beer. On Thursday, we hit the ground running cycling with Fat Tire Bike Tours. If you're ever in Berlin (or Barcelona ... or Paris ... or any other city that has this tour company), I highly recommend this tour. I said last week that we became big fans of free walking tours during our six-week adventure, but the bike tour was definitely worth the money because (a) we got to cover a lot more distance, (b) our feet didn't hurt at the end of the day, and (c) it is really fun to ride a bike in a city with such a prominent cycling culture.

Our tour guide, Alex (pictured below), was Canadian but had lived in Germany for several years and was very knowledgeable about the city's history. It was also nice having a native English speaker as a tour guide because it wasn't a challenge to understand anything he said. 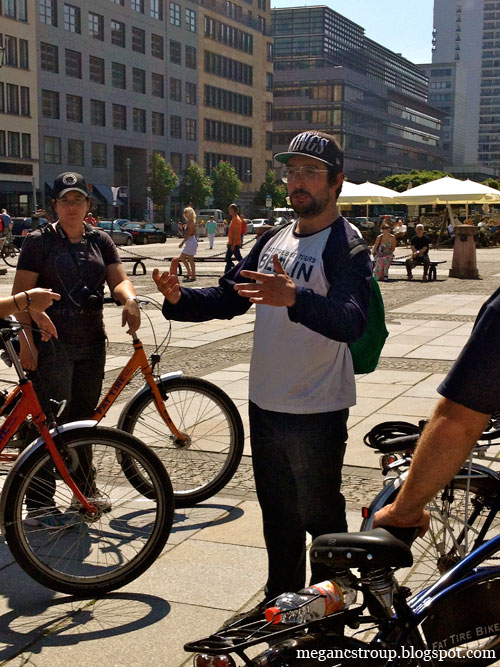 Some of the tour stops included the former Nazi headquarters building, which now houses the German version of the IRS (it's okay, laugh away; we did!) ... 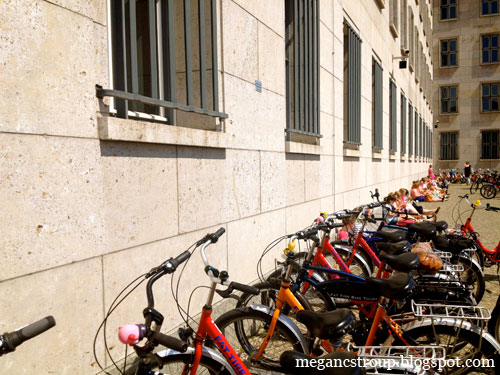 ... Humboldt University, where 20,000 books from the school library were burned by Nazis in 1933. Apparently there is now a large room with empty shelves for 20,000 books under the plaza as a memorial, but the window that looks down into it hasn't been cleaned for years, so you can't see anything. Pretty sad if you ask me ... 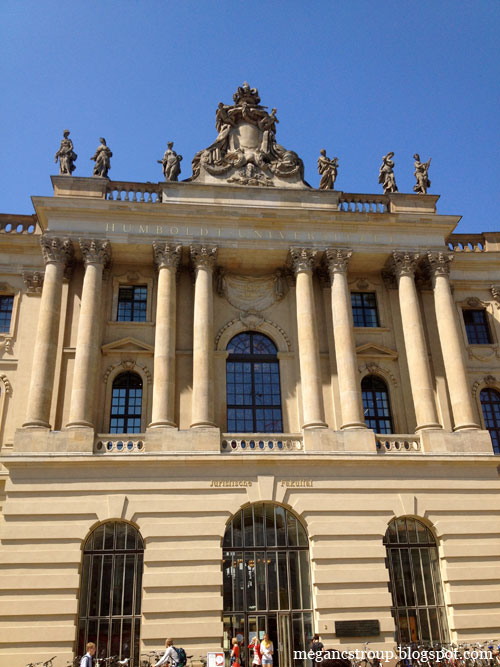 ... the French Cathedral, which is situated across the plaza from a German cathedral that was built just a wee bit taller so the Germans could claim their superiority ... 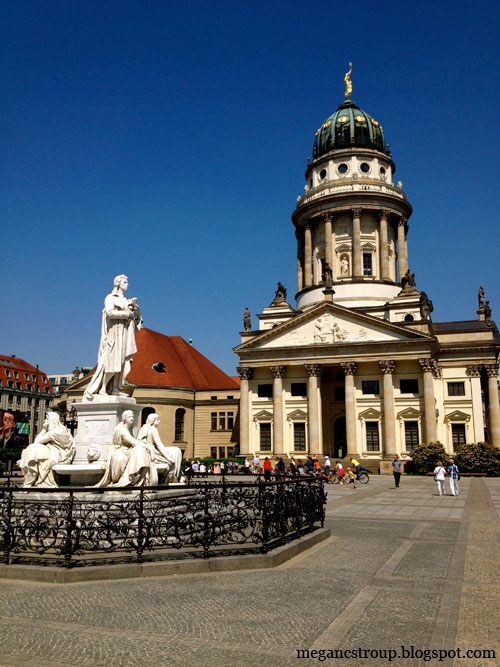 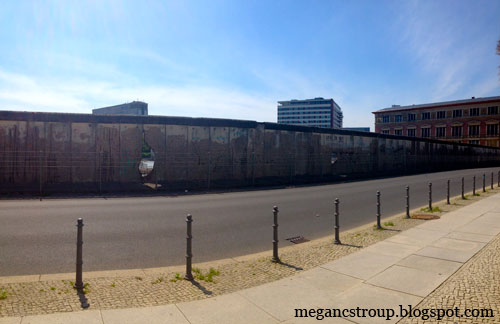 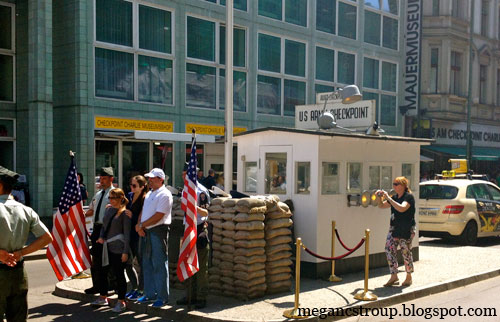 ... the Holocaust memorial, officially called the "Memorial to the Murdered Jews of Europe," which I think is a much more poignant and meaningful name ... 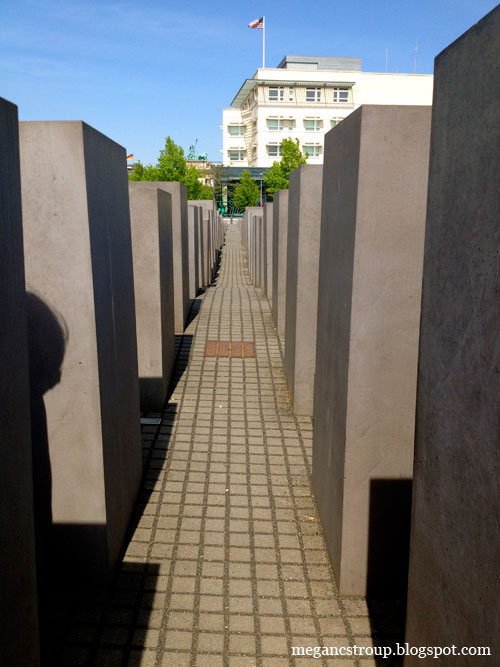 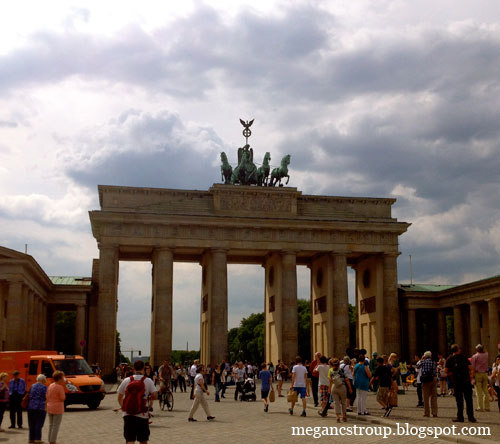 ... Reichstag, the seat of the German Parliament ... 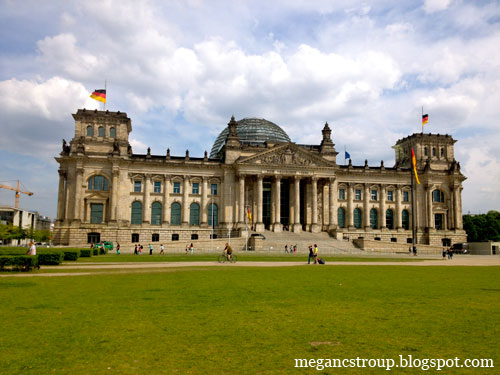 ... and the gorgeous Berliner Dom (Berlin Cathedral), which served as the private church for the Prussian royal family. 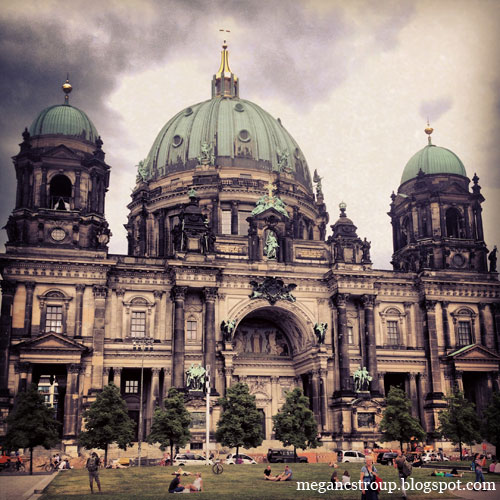 We also got extremely lucky with the beautiful weather on the day of our bike ride. One of the tour guides joked Berlin only gets four days of sunshine each year, and we happened to arrive on one of them. 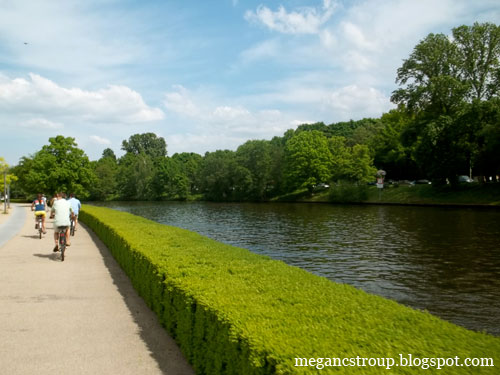 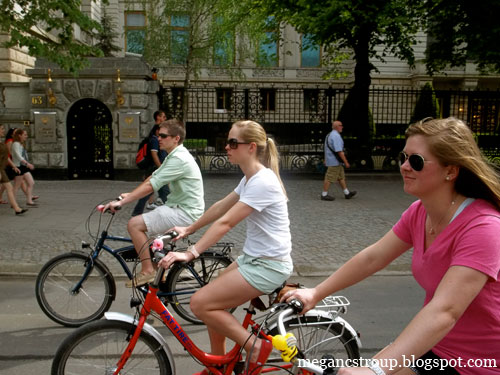 That evening, on our way to a Turkish restaurant a few miles from our hostel (fun fact: Berlin has the largest concentration of Turkish people outside Istanbul), we walked past the East Side Gallery, a section of the Berlin Wall that has been painted with inspirational quotes and designs, such as this one: 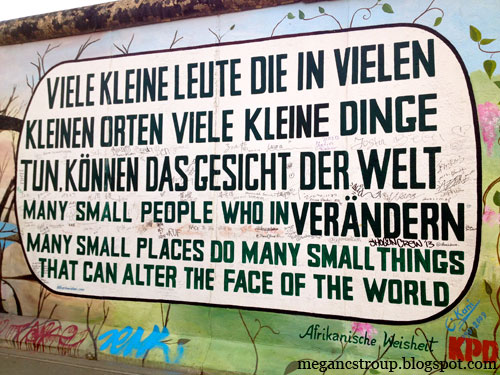 We also spent most of Friday in Berlin before heading to the airport for our next stop. We went back to the Victory Tower, which we had biked past the previous day, and climbed it for spectacular views of the city. 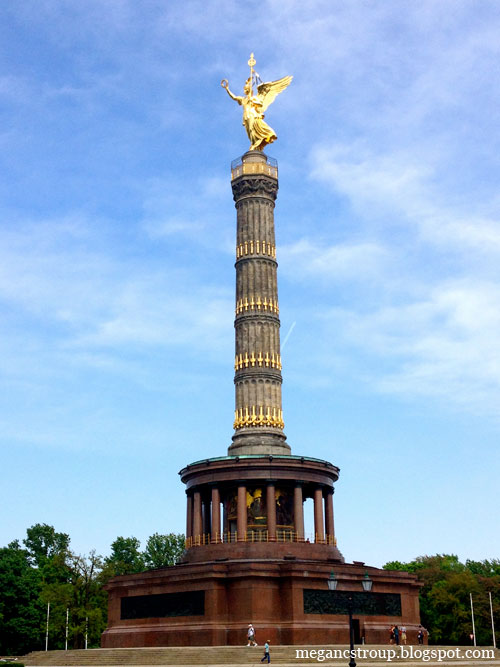 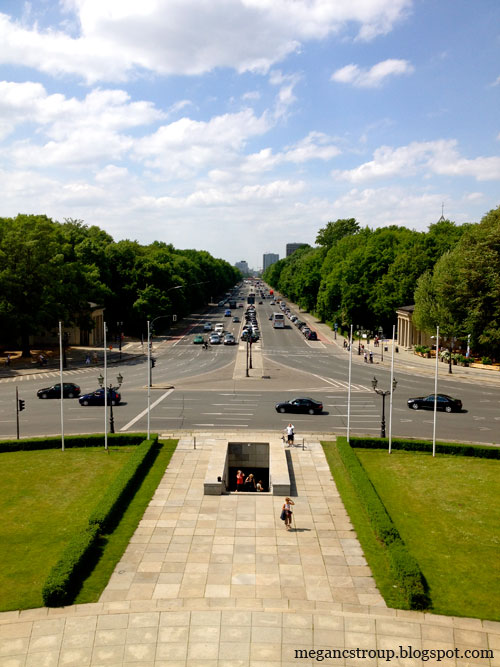 The rest of the afternoon was spent drinking beer (and wine, for me), eating in the park and shopping for souvenirs. The one thing I didn't take pictures of in Berlin was our bar-hopping experiences, but that was probably a good thing. ;) I did snap a photo of these fun drinks, however, which were sold on a street cart outside the train station by our hostel. Does America have these, and if so, where can I get them?? 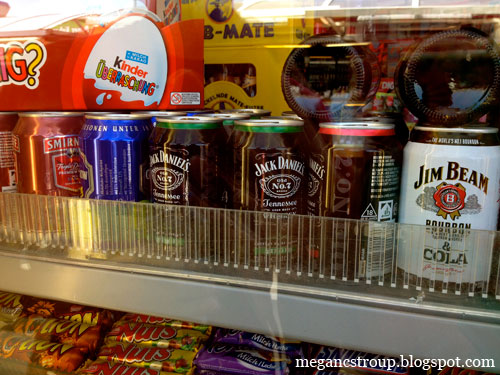 And that's Berlin! To be honest, it was one of my least favorite cities of the trip, mostly because I felt like I was walking around New York City except everyone was speaking German. It just didn't have the charm of some of the other cities we visited. Have you been to Berlin? What did you think?

Grab a button and link up below with your travel stories and tips! See you next week when I recap my weekend in the French section of Switzerland. And, just in case you missed them, check out my past posts on Amsterdam and Prague. :)