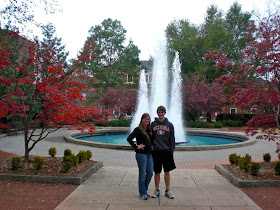 My brother and I on the UGA campus.

"You yell 'Go Bulldogs,' and then you bark," my brother told us.

"Megan, you sound like a seal." (This from my sister.)

We were trying to learn the University of Georgia student chants and cheers before the football game on Saturday, and all Michael could tell us was that we had to bark like bulldogs. Well, let me tell you, during Georgia's 19-10 victory over the Kentucky Wildcats, we perfected that bark. And it was more of an "hoo hoo hoo," but in a deep canine-like voice, if that makes any sense.

After learning to be a Georgia football fan, of course I wanted to learn about the other traditions and/or superstitions around campus. When we returned to Athens after Thanksgiving to drop Michael back off at school, we took another tour of the campus.

First, Michael showed me this arch, which is rumored to be cursed. If you walk under the arch, you won't graduate in four years. Well, I was arrogant enough to walk under it because I'm not graduating in four years, so ha! I beat that system. Michael says he hasn't walked under it yet. 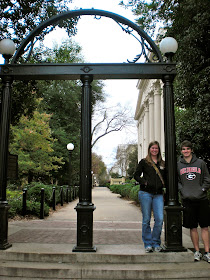 After the arch, we visited the bell tower. After the game the previous Saturday, there had been a huge line, so I figured I would just wait until our return trip to participate in this particular campus tradition. Unfortunately (as you can see in the below picture), the rope was tied up so I couldn't ring it. :( But I did get to read about the history of the tower on a nearby plaque, which is included in the below caption. 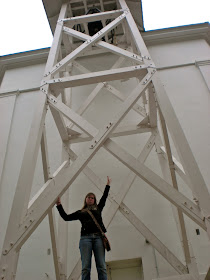 Originally used to call students to classes, chapel services, and special events, the University of Georgia chapel bell was cast by George Holbrook of Medway, Massachusetts in 1835. The bell's arrival on campus is shrouded in mystery, but it is believed to have replaced an earlier bell between 1903 and 1911. Now primarily used to toll Georgia football victories, the chapel bell has weathered stolen clappers, rivalries, and a brief career as a World War II air raid "siren." The bell has been housed in its present location since circa 1913. The tower and bell restoration were completed in August 2008.